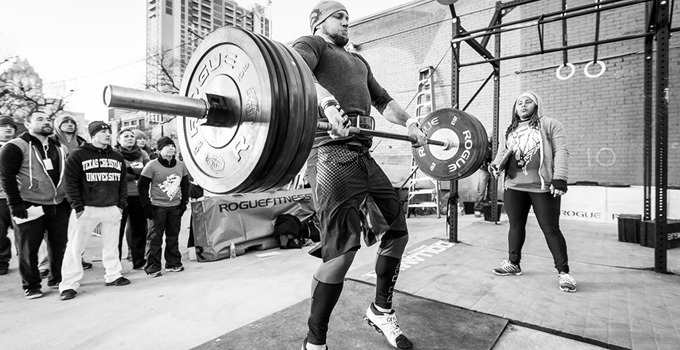 What is the Masters Age Group Online Qualifier (AGOQ) you ask?

Watch the below addition of The CrossFit Games Update Show with Sean Woodland, Rory McKernan and Annie Sakamoto.

What happened in the Masters Age Group Online Qualifier (AGOQ)?

There were not just beasts all round lurking in the Masters competition, but this year we saw five former individual CrossFit Games competitors in the 35-44 Women division.

Samantha Briggs was a surprise competitor in the 35-39 Masters Women division after having to withdraw from Regional competition because she had to have surgery for a fractured joint and ruptured medial ligament in her elbow. However, before she had surgery she didn’t just complete all four online qualifier workouts, but she was able to complete them all back to back IN THE SAME DAY! Sam took 3rd place in workout 3, and took second place overall in the online qualifier. Sam Briggs is a BEAST!

Anna Tobias finished first overall by 10 points over Samantha Briggs and Rebecca Voigt tied sixth with Helena Falk. Samantha Briggs is the overwhelming favorite to win the 2018 CrossFit Games, but Tobias and Voigt might have something to say about that.

In the 35-39 Masters Men division Kyle Kasperbauer #AlwaysMaster takes the win by 14 points over Alexandre Jolivet. And Adam Izzo and Justin King came in 3rd and 4th place and were separated by just 2 points. Ben Alderman has been to the CrossFit Games Regionals since 2012 and placed top 10 in every single one of those events, so he is also one to watch and has what it takes to be on top of that podium. And lastly, watch out for 2012 CrossFit Games Individual Phillip Kniep, who is another one to keep an eye on in this division. He made history when he went into the online qualifier in 92nd place, but finished 17th overall and is now headed to the 2018 CrossFit Games.

The 35-39 Masters Men and Women division is going to be super competitive, so don’t miss it!

The 40-44 Masters Men division are also going to be a blast to watch. Neal Maddox had the hype coming into the online qualifier, he wins 3 of the 4 qualifier workouts and runs away with first place overall, and certainly has the continued hype going into the Games. Shawn Ramirez had a great comeback last year and won his forth straight championship, and this year he is going for his fifth straight Masters championship in this division. He tied 3rd place with Robbie Perovich in the online qualifier. And former individual Games competitor David Levey takes fifth place overall.

Their were intriguing match ups and amazing performances in the 45-54 Masters division. In the 45-49 Masters Women division just 4 points separate Nicole Abbott in first place, and Amanda Allen in second place. Cheryl Brost is the only woman in the top 6 who won a qualifier event, she is just 2 points behind in third place, and is in search of her third straight CrossFit Games Masters championship.

In the 45-49 Masters Men division our top three Masters are Steve Johnson, Giulio Silvino and Arthur Komorowski. Bill Grundler sits in 4th place and his little brother James Grundler sits in 6th place, who has two times 7th place finishes in three of his appearances. This is the first time he’s going to be healthy so he is one of the picks for the Games, alongside Matthew Swift, a two times Games Masters athlete and sits in 12th place overall. We hope to see both James and Matthew at the 2018 CrossFit Games!

In the 50-54 Masters Men division Christian Biagi is the winner, he is the fittest man in Alaska, and had just one finish outside the top 5 in the online qualifier. But Ron Ortiz is a force to be reckoned with, he’s been to every Masters competition at the Games except for one, and is the only man inside the top 5 on the leaderboard to win an online qualifier workout. He takes forth place overall and continues to defy expectations.

It never ceases to amaze us of what the 55-60+ Masters division are capable of doing, and boy did they put on an incredible performance!

In the 55-59 Masters Women division Sue Velott, a multiple Games athlete, had an average win of third across the four online qualifier workouts, she did not win a single workout, but never finished lower than forth. She finished in first place overall by 17 points over Mary Beth Prodromides. Hylie Thompson takes a win in workout three which sits her in third place on the leaderboard. And Lynne Knapman holds strong, she has been in every single Masters competition at the CrossFit Games, and she sits in 10th place overall.

The 55-59 Masters Men division is one of the closest leaderboards in any Masters division. Just 21 points separate 1st place from 9th place. Bubba Hagood edged out John Busch and three time champion Will Powell by just two points, yet nobody inside the top 8 won a single workout in the online qualifier.

Lastly in the 60+ Masters Women division Patty Failla wins three out of four workouts and finishes 8 points ahead of Shaun Havard. Pia Gund never finished lower than 8th place in a workout and takes third place. And Pauline Sciascia had just one finish out of the top 6 and she finishes forth overall. These 60+ women had no problems with getting upside down and doing a 100 ft handstand walk, that’s why they’re the clear cut of this division. And congrats to the amazing Mary Schwing for taking the 18th qualifying spot to the Games, and being the oldest athlete at the CrossFit Games at 66 years old!

And last but not least in the 60+ Masters Men division David Hippensteel is the back to back champion in this division, he blows away the field and takes two of the four workouts. He has the largest margin of victory in any of the Masters divisions, and finished first with a total of just 14 points. Tom Bourdon is 29 points back in second place, and Stephen Angove is a distant third with a total of 63 points.

Congratulations to all Masters athletes that competed and gave it their all. You should be super proud of your accomplishments and all your hard work and efforts. We look forward to you coming back stronger than ever before in the 2019 CrossFit Games season.

To all 240 masters who have qualified for the 2018 CrossFit Games, we’ll see you in Madison August 1st – 5th….. May the Fittest on Earth WIN!