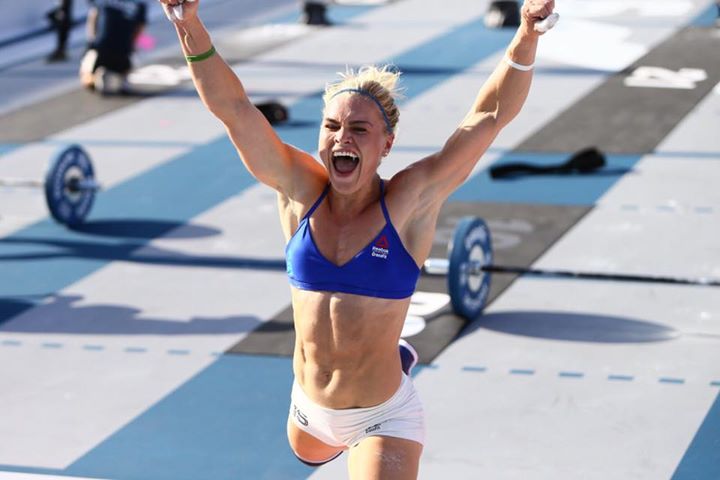 Katrin Tanja Davidsdottir is a 23 years young Icelandic, who was a gymnast from the age of six to sixteen, and then trained in track for 1 year. Katrin was looking for the next big thing to challenge her, so serendipitously in the summer of 2011 she saw on TV fellow Icelandic Annie Thorisdottir win the 2011 CrossFit Games. She decided to give it a try and that was it, she immediately fell in love with the sport. Katrin joined the same box as Annie, CrossFit Reykjavik in Reykjavík, Iceland and since then they’ve become training partners and work out together whenever they’re both in Iceland. They’ve become best friends and push each other to be the best versions of themselves.

Katrin first qualified for the 2012 CrossFit Games and came in 30th place, she competed again in 2013 and came in 24th place. She missed out on qualifying in 2014, however Katrin feels that missing this qualification was the differentiator that helped her come back and win the 2015 CrossFit Games. Katrin went on to win back to back the 2015 and 2016 CrossFit Games and has been crowned as the Fittest Woman on Earth two years running. The only second woman to ever repeat as champion, first being fellow Icelandic, Annie Thorisdottir winner of the 2011 and 2012 CrossFit Games.

Katrin is an inspirational, hard working, hilarious (check out her Twitter feed, she loves to pay herself out!) woman and athlete who loves to constantly challenge herself. She has an unbelievably positive outlook on life, and is super passionate and loves every minute of the CrossFit world. It always looks like she’s enjoying herself and having a great time, even when the toughest workouts are thrown her way. We love everything about this gorgeous, happy superwoman. Thank you Katrin for being a bright and shining star. You Rock!

Everyone that makes the games is fit. We’re all strong. I think the differentiator between podium and not is the mental game. It’s a long week. It’s five days of competing. It’s 15 events. Can you block out the noise, the media? Can you recover? It’s how you recover, how you sleep, how you eat. All of it. – Katrin Davidsdottir

Katrin works with a nutritionist on her macros, she weighs and measures her food and knows exactly how much protein, carbs, and fat she needs to eat. She eats clean yet does have a bit of a sweet tooth so likes to indulge in chocolate and cake every now and again. She warms up every day for about two hours pre workout which includes rolling, stretching and general warm-up. Katrin does multiple workouts in a day 3+ times a week and she strictly schedules her rest days, typically they are 4 or more days per month. Her programming this year was much more structured since she moved to Boston and trained at CrossFit New England full-time with coach Ben Bergeron.