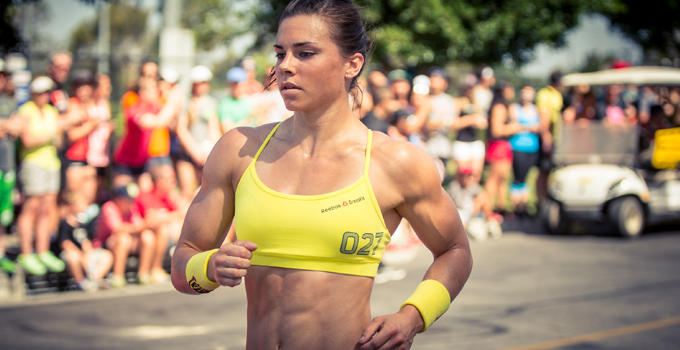 Julie Foucher is a medical degree student, professional CrossFit athlete and coach. She is also considered one of the fittest and most consistent CrossFitters in the world, never finishing outside top 5 at her four Games appearances. Julie’s CrossFit athleticism stemmed from high school gymnastics, tennis, soccer, and track and field. As a senior she won the Michigan Division II all-around gymnastics championship.

Unfortunately during Julie’s appearance at the 2015 Central Regionals she tore her Achilles tendon. We’ll never forget her heartache, drive, determination and spirit that day, it was devastating yet an inspiration to say the least. Julie carried on competing with a large black medical boot and still finished in 8th place. WOW! This injury resulted in surgery which prevented Julie from competing at the 2015 CrossFit Games. Post injury, Julie finished in 13th place at the 2016 Central Regionals.

Currently Julie is focused on her medical training and will graduate class of 2017 with her medical degree from Cleveland Clinic Lerner College of Medicine at Case Western Reserve University.

Julie has had a life changing experience due to CrossFit. She has incredibly beautiful movement, technique and consistency. We love this determined, hard-working, strong and inspirational woman and we’re excited to see what’s next for this champion! Will we see her again on the podium at the 2017 CrossFit Games? We sure hope so!

The harder it is, the better you become. – Julie Foucher

Julie eats strict paleo, but has 1-3 full cheat meals per week. She swears by PetesPaleo meals from The Paleo Chef and snacks from Steve’s PaleoGoods.

She does multiple workouts in a day 3+ times a week, strictly schedules her rest days and typically rests 4 or more days per month. Julie began CrossFit with Coach Doug Chapman from HyperFit USA. For the past 5 years her coach has been Ann Arbor who determines her programming. Julie now trains and coaches at CTOWN CrossFit in Cleveland, Ohio. She loves helping athletes live healthier and more fulfilling lives.