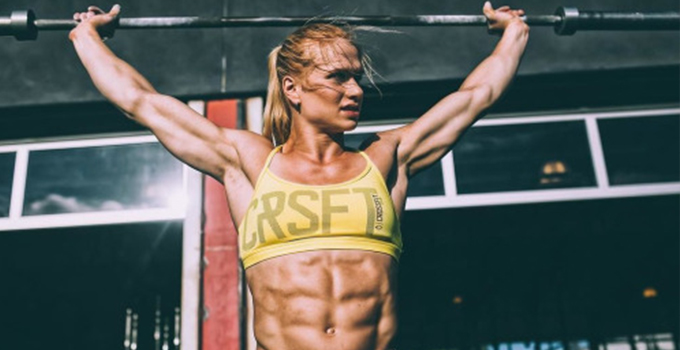 Annie Thorisdottir aka “Thor’s Daughter” or #Dottir, has always been a superstar athlete and a born winner. Annie is a 27 year old Icelandic beauty from Reykjavik and all ABS and SMILE. She’s also the first woman to win the CrossFit Games back-to-back, becoming 2 x Fittest Woman on Earth!

As a young girl Annie was a gymnast for eight years, plus a ballet dancer and pole vaulter for two years. Annie tried CrossFit for the first time in 2009 when a friend signed her up to a CrossFit competition. With no prior CrossFit training, Annie went and won the competition. That same year Iceland received a wild card for the 2009 CrossFit Games, which meant Annie won a spot to compete. She had two months to train before making her CrossFit Games debut. It was the beginning of something beautiful, Annie performed strong and took home 11th place overall. That was it, Annie was in love with the sport and a CrossFit star was born.

Annie also competes in other weightlifting and fitness competitions. She also dominates the Women’s Regionals each year, placing 1st in 2012 and 2014 at the European Regionals and placing 3rd in 2015 and 2nd in 2016 at the Meridian Regionals. Annie met her boyfriend through CrossFit. Her family does CrossFit, and she owns a CrossFit box in Iceland. Oh, and her BFF and training buddy is Katrin Davidsdottir, the second back-to-back 2 x Fittest Woman on Earth. Annie was actually Katrin’s inspiration to begin CrossFit after she watched Annie win the 2011 CrossFit Games. It goes without saying that CrossFit has been a life changing experience for Annie. As a professional Rogue CrossFit athlete Annie never gives up, she always sports a vibrant smile, she’s passionate and down to earth. Annie always puts on a strong performance and is constantly working on her technique to become a better athlete. She’s an inspiration to the world of fitness, and no doubt to the entire world. We’re also huge fans of Annie’s moto: TRAIN, WIN, SMILE, REPEAT!

Never let fear hold you back, never let uncertainty be the reason to hesitate, never let the unknown break you. Find your wings and fly… – Annie Thorisdottir

Annie isn’t strict paleo since she adds in extra carbohydrates and dairy. She eats high quality foods and doesn’t measure her amounts. She eats a lot of veggies, eggs, chicken, grass fed meat and sweet potato. When she’s in Iceland she eats alot of dairy since they have good, high-quality dairy there. She’ll eat fajitas and wraps occasionally and she loves dark chocolate and Mexican! Annie takes Pre-Workout supplements before every training session. She also takes Natural Amino both during and after training once or twice per day and has a protein shake after training. What you may not know is that Annie also enjoys contrast bathing, which treats muscles by immersion in cold and hot water to reduce swelling and inflammation. She’ll do this every other day, or sometimes between hard training sessions to get her body and nervous system ready for the next session.

After two years of CrossFit (she worked out with a training partner, and no coach), Annie decided to go pro so she began working with coach Jami Tikkanen. Since then Jami has determined her programming. Annie trains multiple times a day, 5 + times a week. She strictly schedules her rest days and typically rests 4 or more days a month. Annie is the co-owner of Crossfit Reykjavik, Iceland where she also coaches and trains athletes in her spare time.

You can do more – you can always do more. – Annie Thorisdottir